After talking with Nabil yesterday, he confirmed that the new spark plugs that I had purchased in bulk a while back were indeed OK to use in this engine. When I was removing and gapping the spark plugs a while back, I wanted to replace them just to be sure, but the new plug tips were different from the old ones, so I waited. 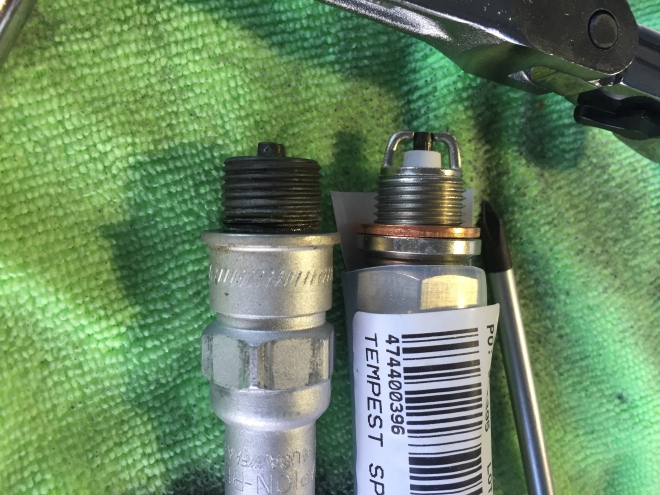 Today I replaced the original Champion REM38E with Tempest (formerly Unison) UREM37BY in the top 4 spark plugs. I torqued to 30-35 foot-lbs (360-420 in-lbs). I used oil instead of anti-sieze this time.

I started the engine and flew for two touch and goes. The engine started nicely…but will see if this is consistent. On the 2nd touch and go, touchdown cracked the right wheel pant fairing…same thing that happened in the past to the left wheel pant fairing. The holes in the bottom of the wheel pants were not carved out enough, so when the wheel compresses and bulges in just the right way, it catches the rear lip of the wheel pant and breaks out a chunk of fiberglass. I heard the rubbing right away after touchdown and aborted the takeoff part of the touch-and-go. I taxied back and sure enough, now I have two cracked wheel pants.

I removed all 3 wheel pants, applied fiberglass and epoxy to the two main pant rear halves to fix the cracks, and will plan to carve away more fiberglass for clearance when they dry. I also removed the wheel pant fairings, gear leg fairings, and upper intersection fairings to take home for paint or vinyl.